Daniel vs. The Wall

This past week I've been out training with my old roomate, Jun, in Frostburg Maryland. The riding out here is hard, very hard. During our five rides this past week it rained during four, and we averaged over 15mph once. I realized midway through the week that we were just 15 miles from the town of Westernport which I recognized for one thing: The famed Westernport Wall of the Savageman Triathlon. This climb, and its 31% gradient has quickly become one of the most famous climbs in all of triathlon for its steepness and Tour-like atmosphere on raceday. The race itself is said to be the hardest half-iron tri in the world by all who race it. Having trained on the course this past week I can report that no half-iron I've ever done even compares with this course, and I've done some pretty challenging races. Having seen the videos from the Westernport Wall on raceday I had to go check it out and below is Jun and I attempting to conquer "The Wall".  The Savageman Triathlon is on my triathlon bucket list.  If you're ever passing through Western Maryland check out the Savageman course, you will quickly realize that all of the courses which you thought were challenging, were not!


Raceday chaos on the Wall

Daniel and Jun Versus The Wall

This past weekend, for the second year in a row, I kicked off my season at the Revolution 3 Knoxville triathlon down in Tennessee.

Swim: 19:41 20th fastest split
I went into the swim prepared for the worst. The swim and I just have not been clicking this year. Furthermore with the cold and wet spring in the Midwest I wasn't able to get outside for my typical weekly May open water swims. This would be the first open water swim since September. And I was wearing a new wetsuit for the first time as well. Anyway the swim ended up better than I anticipated. Not good, but not too far off. Got out well and right into the second group where I typically swim. Stayed in the group through the first turns but then halfway through a funny thing happened. I just lost contact. Wasn't struggling too much, the group simply swam away from me. Usually once I get through the first 5 minutes I'm good for staying on in the group but not today. I don't know if it was a momentary lapse in focus or what but it was a helpless feeling watching the group of 10 just pull away. Ended up losing only about 20 seconds to the group but 20 seconds was just enough to allow the 10 or so guys to team up on the bike and work together. All of the 5th-13th place overall finishers swam in that group so that was my one chance at a top-10 finish.

Bike: 1:00:50 23.8mph 16th fastest split
Moved up several positions in the first 5k of the bike but there would be no catching the second group of 8 guys. Rode decent on the day, not great, but not bad. The bike course is what makes this race. It is just a lot of fun to race the fast sweeping turns mixed with two separate 2 miles climbs and a 40+ mph descent.

Run: 35:24 14th fastest split
I had big hopes for the run but the legs were not there which I believe is mostly a result of the challenging bike course. And also probably the 80 miles of running I logged the previous week in training.

Overall: 1:57:48 14th place
I feel alright with my race. Certainly not any kind of breakthrough but the thing I told myself before the race is that barring injury or some unforeseen event, this will be the most out of shape I am for any race this year. And if finishing in the top half of the pro field is my most out of shape, then I should be able to pull off a good year. I just need to keep working. Swim was a little better than I expected and run was a little worse. But overall I was consistently faster than last year all around. It felt great to put on the jersey of my new team, US Pro Tri, for the first time. Next week I'll do it again and try to build off of this out in Maryland at the Columbia Triathlon. Finally I'd like to say that Revolution 3 puts on amazing races on very well thought out venues. I encourage all to check out this series which is doing all it can to support the sport of triathlon. In fact I just booked my ticket out to Connecticut to race Rev 3 Quassy on June 5! 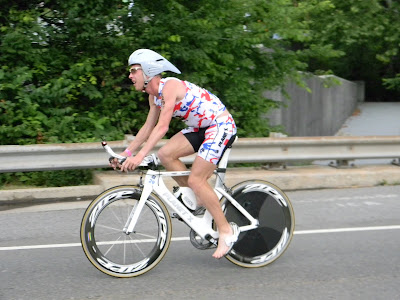 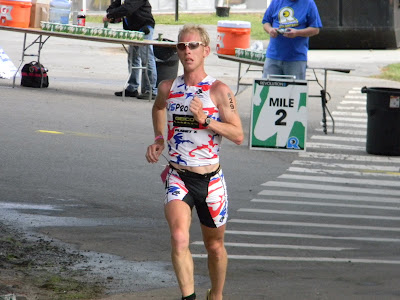