It's that time of year again when I brag, not about myself, but about those I have the privilege of coaching.  Coming off of an overwhelmingly successful 2010 season I am happy to report a crew of established Bretscher Multisport veterans, and newbies, of all abilities were able to put up equally successful results in 2011.  Here are the highlights of the year. 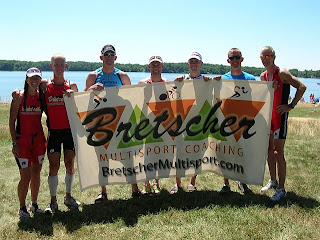 Andrew, St. Louis:  Coming off a successful 2010 campaign as BMS athlete in which Andrew was awarded USAT All American honors, 2011 was Andrew's best season yet.  He kicked off the racing season early in February with a 3:02 in the Austin TX marathon, went to the New Orleans 70.3 for his first tri of the year (although there was no swim) and came away with his highest placing ever in an Ironman event, 6th in the 25-29 AG.  Followed that up with a new PR and 2nd AG at the Memphis in May Triathlon.  Unfortunately Ironman Couer d'Alene did not go how Andrew envisioned, getting sick midway through the run while on pace to break 10 hours, but credit to Andrew he did not allow his Ironman fitness to go to waste and capped off his season with his first ever triathlon overall win in the Big Shark Triathlon.  Andrew will return for his fourth consecutive season as BMS athlete in 2012, race schedule TBA.

Billie, Plainfield IN:  Billie joined the team in 2011 looking to take his tri game to new heights.  He raced a shortened season as he had twins arrive in August.  Billie put up quality results in local early season races Terre Haute and an age group victory, 2:14 PR in the Muncie Olympic Tri.  He capped his season off in July with his best performance of the year, the Muncie 70.3 with a 50 minute PR of 4:51.  Billie will be back on the squad in 2012.

Dana, Chicago:  Like Andrew, Dana returned to Team BMS in 2011 for his third consecutive year on the squad coming off a 2010 season which saw him named USAT Age Group All American.  Dana had a solid season with an early season age group victory in the Kansas 70.3, and then later in the year bettered his 70.3 PR twice at the Muncie 70.3 and then again in the Pigman half with a 4:14.  He went under 2 hours in an olympic distance for the first time ever in the Pleasant Prairie Tri with a 1:59.  Finally Dana finished his year off with his first Iron distance in many years at Rev 3 Cedar Point.  Dana's 9:20 finish landed him 4th place overall and narrowly bettered his previous PR of 13 hours. 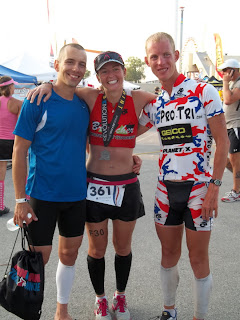 Greg, St. Louis:  Greg joined the BMS squad in 2011 after signing up for Ironman Florida.  He raced many local early season races consistently finishing 20 minutes faster than previous years and towards the top of his age group.  He managed an olympic PR of 2:23 and a 5:18 finish at the Racine 70.3, a 30-minute PR.  Greg finished the year on the highest note at Ironman Florida with an 11:03 debut at the distance, good enough for 407th overall on the day.  Greg will return to the squad in 2012, Ironman Arizona will be his focus.

Jen, Zionsville IN:  Like Greg, Jen joined in 2011 with Ironman Florida as the major goal.  She won her AG with a 2:36 olympic distance performance at Tri Indy.  She had what was likely her best performance of the year at the Steelhead 70.3 and did something she didn't plan on: qualified for the 70.3 World Champs.  Catching the flu 7 days before Ironman Florida made things difficult as Jen couldn't workout 6 out of the last 7 days leading into the race but a gutsy performance still yielded a 12:53 finish, within minutes of her PR.

Julie, Chicago:  After many years in the sport and 2 previous years on team BMS, Julie entered 2011 with her much anticipated Iron distance debut on the radar.  In the leadup to that race Julie couldn't help but set PRs in every other distance she competed.  This included a 2:22 olympic distance PR, and a 5:12 70.3 PR.  Julie also finished 2nd place overall at the Green Bay Triathlon, her highest overall finish ever.  And then at her much anticipated Rev 3 Cedar Point she put together what was likely her greatest athletic performance ever going 11:26 in her first Iron distance, good enough for 7th place overall on the day.  Julie was pretty excited.


Mike, Brownsburg IN:  "Racing machine" Mike was back on the squad in 2011 with more race results than I can mention.  Highlights for Mike include his highest overall finish ever with a 2nd at the June Muncie Sprint Triathlon, along with another overall podium, 3rd place overall at the Hoosierman Triathlon.  Add to that a 1:33 half marathon PR and a 21st place age group finish at the Steelhead 70.3, Mike's highest age group placing ever in an Ironman 70.3.  Unfortunately Mike's Ironman Wisconsin got a little ugly as he fought issues on the run which prevented him from being able to run but credit to him he didn't pull out and walked it in to finish the race.  I know Mike and the race will only fuel his fire when he goes to Ironman Louisville and Florida in 2012.

Moira, Decatur IL:  New to the squad in 2011, Moira raced a series of successful local sprints followed by her peak for the season, and half distance debut, the Racine 70.3.  In Racine she had her best race of the year finishing in 5:21, good enough for 14th place in her age group.  Moira will return in 2012 with Ironman Wisconsin on the radar. 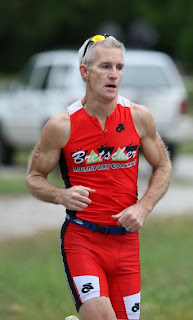 Ron, Cedar Rapids IA:  Ron returned for his second year on the squad in 2011 coming off a 2010 season which saw him named age group All American after finishing the season ranked 2nd in the 50-54 age group.  Ron started 2011 hot with an age group victory at Memphis in May, finished 2nd place overall at the Door County Sprint, and went a lifetime PR for the half distance at the Pigman Tri with a 4:30 finish.  Ron's major focus for the year was the highly competitive HyVee Triathlon where he finished in 2:11 on a tough course and yet another age group victory.  Ron capped off the season earlier this month in Las Vegas at the ITU Long Course World Champs.  His first appearance in a World Championship and significantly further than he had ever raced, Ron brought home the age group bronze medal in the 50-54 age group. 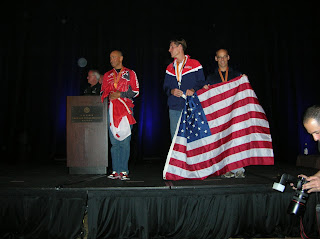 Suzanne, St. Louis:  Coming off a successful 2010 season with team BMS and the "gutsy performance of the year" at Ironman Wisconsin, Suzanne was back for more in 2011.  She put together successful results in the Austin Marathon, New Orleans 70.3, and a 4min PR with a 2:44 olympic distance finish in tough conditions at Memphis in May.  But the focus all year for Suzanne was the Vineman full-Iron in California where she recorded a massive 57 minute PR with a 12:26 finish.

Thanks everyone for another fantastic season.  Look for more of the same in 2012 with a team as strong as ever and a growing team presence at the races.  Who wants to be apart of this?

My 2011 season is complete.  After dealing with a pretty significant calf pull suffered during the run of the Westchester Triathlon and, consequently, having to withdrawal from the start list of the Pocono 70.3 and Rev 3 South Carolina, my focus races for the end of the season, I ended up deciding to call it a year and not chase a late season race.  I had the desire to race more, but couldn't really find another race option to warrant traveling to.  I tossed around the idea of a November Ironman for a while, but that would make 3 Ironmans in a 5-month span and having only raced one Ironman prior to 2011 I thought it might be just a bit much.  Mainly though I just wasn't fully committed to racing another Ironman this year and probably the biggest lesson I've learned in my short stint of Ironman racing is the importance of being completely committed to the task at hand heading in.  I am heading into the offseason hungry and excited for next year, something I haven't felt heading into the winter months in a few years.

My 2011 season didn't start or end well, but all in all I feel pretty good about what I was able to accomplish this season.  I started this race season embarrassingly out of shape and it took a lot of mental strength to stick to the training plan through those initial race results.  But I stuck to the plan and by the time July came around I was rolling and gaining momentum with every race.  Looking back and comparing my May-June race results with my July-September results it's hard to believe that these results all came in the same season.  Highlights for the year were my three separate 5th place finishes at the Muncie 70.3, Ironman Lake Placid, and Rev 3 Cedar Point.  Cedar Point was without question the best shape I was in all season and my best performance of the year, unfortunately riding 6 miles off course on the bike cost me what most likely would have been a finish time in the 8:30s and a potential podium finish (and not to mention the money).

Looking ahead to next year I think my first priority has to not be so much getting faster, but being fit for a much longer stretch.  My main goal in this sport right now is simply to make a comfortable living.  Getting faster will only help my cause but mostly I need to be in shape for longer than just 3 months.  If I can replicate the same fitness I had in the late season this year and maintain that fitness for 6-7 months instead of 3 then I'm in for a really great year.  I don't have to be faster, just race fit for longer.

All in all I feel really good about where I'm at in life right now.  A year ago I was coming off of my second consecutive rough year of under performing, my team had just announced it would no longer exist at the end of the year (all my sponsors gone), my job as triathlete was feeling more and more like a burden, I wasn't having fun, the 9-5 and steady paycheck was looking very appealing, and I had begun applying to some real world jobs (gasp) with the intention that I would take a year sabbatical at the very least or quit the sport entirely if I landed a job I wanted.  It was during that stretch last winter that I quit exercising for several months, got way out of shape and I think it was the best thing for me.  Absence makes the heart grow fonder as they say, my mind rebooted during the down time, I got excited about training, racing, and triathlon again, signed on with a new team, and approached the season with a brand new, healthier mindset.  I learned to embrace the setbacks and disappointments along the way as simply an unavoidable and sometimes necessary part of the process towards being great.  All the time off certainly put me way behind the game at the start of the season, but I think I was also better towards the end, and will be a better athlete and person in the future, because of it.  Today I'm really enjoying my career as pro triathlete and coach.

I look forward to getting just mildly out of shape this offseason and coming in hot to 2012!
Posted by Daniel Bretscher at 12:22 PM No comments: