I finished off my 2012 race season this past weekend with my 5th Ironman, Ironman Florida in Panama City Beach.  Although this race itself was a little disappointing, I am very proud of my season as a whole.  Here is how my day went.

Swim: 54:01  12th fastest split
Thankfully the swim was pretty uneventful for me.  Despite there being no wind whatsoever the surf was pretty substantial.  Once navigating through the breakers the water wasn't calm as I expected, there were still large swells the entire duration.  I ended up swimming a little easier than I planned on account of the surf which I think was the right move since it limited the amount of ocean water I choked on and I knew that drafting would be pretty much negated by the rough sea.  I excited the water in pretty good position, 12th place and right in the middle of the action.

Bike: 4:20:49  25.8mph  11th fastest split
I went into this race mentally prepared for anything on the bike.  I hoped for a spread out bike, yet I was also very aware of what 41 pro men on a flat course could mean.  I ended up getting a mix of everything.  Things were pretty spread out initially and my legs were very strong right from the start.  I steadily worked my way through the field the first two hours.  I would ride hard until I caught the first person in sight, relax for a bit, decide the pace was too easy, work hard to drop the rider, and then bridge up to the next rider in sight.  After a very fast first 55 miles I made it into a large pack when we came to the out and back.  I was pumped when I saw that our group was in second place overall but that excitement was short lived when we made the turnaround as I saw we were about to be caught by another even larger group from behind.  I rode at the front in second place overall from about 60-65 miles and then steadily slipped back through the pack, making note that many of the riders I had worked to drop had gotten picked up from the group behind and were now in the same pack.  I counted 17 guys in our group.  Thankfully we also had four officials with us pretty much the entire way back to T2 so guys were not tempted to push the boundaries of the draft zone.  People tend to think that riding in such a group is easy work but when everyone is spaced legally it is anything but.  The pace and effort were extremely inconsistent and punchy, as guys made moves at the front it'd be 2-3 minutes of near all out effort followed by a few minutes of easy riding.  I'm sure this makes for a great workout, but when your goal is to run a marathon as fast as possible after it's not such a good thing.  After surging like that for two hours under a strong sun and temperatures rising into the 80s I was really feeling fried towards the end of the bike as were many others.  I stayed with the pack until 5k to go when I knew I was in no shape the start the marathon and sat up to try to get my body temperature down, relieve myself, hose myself down with water, and recover some semblance of running legs.

Run: 3:14:00  14th fastest split
Starting the run I was a complete mess.  I saw 5:20 on the clock as I crossed the marathon start timing mat and knew that I was a 2:59 marathon away from breaking 8:20, my ultimate time goal for the day.  The only problem is for the first few miles of the run I was cooked from the bike, I was just out for an easy recovery jog, couldn't even maintain 3 hour pace for the first few miles.  I wasn't alone though, I could tell the guys around me were wilted as well and I was gaining positions running 7 minute pace.  Through a steady diet of coke and ice the first 10k I was actually able to bring my body temperature down, started to find my stride and got moving the second 10k.  I picked up Tom Gerlach for several miles and we both agreed that a strong last 13.1 would bring home the money on this day.  I got faster the second 10k, felt much better, hit 13.1 in 1:30 in 8th place and just over 2 minutes out of 6th.  Then, out of nowhere, not even a quarter mile into the second lap, I strained my right calf pretty substantially.  I didn't step funny or anything and thought it was a cramp initially.  I couldn't push off at all with my right foot and hoped it would work itself out but after a few miles of borrowing salt tablets from fellow age groupers I knew it either wasn't a cramp or wasn't going to alleviate itself.  At this point if this had been any race other than my last of the season I would have bagged it and walked the last 10 miles.  But with it being the last race of the season I wasn't quite as apprehensive about continuing on a bad calf since I didn't feel I was making the strain any worse.  It was a hard pill to swallow that I wouldn't be racing for money or chasing a massive PR in the low 8:20s, but I had to quickly change my mental approach and realize that I still had something to race for, I could still PR and break 8:30 so that was what I set out for.  I limped as fast as I could, but not being able to push off of my right foot I was limited to a max speed around 8:20 pace.  I hit 10k to go, did the math, and realized breaking 8:30 for the race wasn't going to happen.  But there was still my PR, 8:35.  I was running exactly the pace that would put me at my PR.  Quick decision, keep chasing or just bag it and walk home, I decide to keep chasing.  Every mile mark I'm doing the math and am staying exactly on pace.  Then with 5k to go I have the vision of putting myself through all this discomfort and missing my PR by a few seconds and decide no way.  I push the pace really hard down below 8min pace the last 5k and in the end it's about a 90 second overall PR which comes off of my slowest marathon ever. 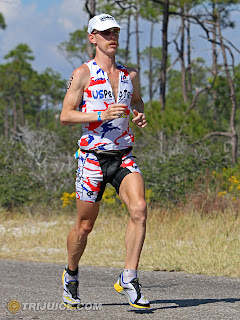 Overall:  8:34:00  12th place
Initially I was pretty disappointed with how things went for me but having had a few days I feel better about it and there's a lot of positive to take away.  A PR is a PR and you can't ever shrug at such a result.  12th place is far from what I envisioned for the day, but we did have 41 male pros on the start line, the largest pro field I've ever raced for a full 140.6.  Even putting the calf issue aside I don't think this would have been a stellar result as it was shaping up.  Riding a hard solo effort the first 2 hours on the bike followed by responding to all of the surges and changes in pace of the pack the last two hours left me in no shape to run a strong marathon.  Thinking back over my history of 140.6 racing this was the first time I've ever not done a solo effort the entire way on the bike and it makes for a much different challenge than the constant steady state effort I'm accustomed to.  In hindsight I don't feel my disappointing performance was an indication of any lacking fitness or poor race execution on my part, I feel it is an indication of Ironman Florida simply being a race that doesn't suite me well or play to my strengths.  I thrive off of long, steady state efforts.  Thinking back over my history of pack racing in 70.3s I don't think I've ever had a good race result in that type of racing.  I need at least some hills and a more spread out race than I'm going to find at Ironman Florida.  As always it's a learning experience and I'll take this experience forward into future races.

Although Ironman Florida didn't go how I wanted I'm still very happy that I did this race and there's a lot that will benefit me going forward into 2013 and beyond.  For one, I'm in Ironman shape in November, I've never been this fit so late into the year.  Last year I was currently five weeks into my offseason at this point.  To me that's five fewer weeks to get out of shape heading into 2013.  Another big takeaway is that I learned a lot about myself, and how my body recovers in the 8 weeks between Rev 3 Cedar Point and Ironman Florida.  What I learned is that I don't recover particularly fast compared to others.  It took me a full month before I felt 100% and could resume full training following Cedar Point.  That left just two quality weeks where I was able to push the limits in training and make significant gains in fitness.  Looking back I think I was probably only able to replicate my fitness from Cedar Point into Florida, I wasn't able to further it by any appreciable margin.  In the future I think I'm going to try to schedule multiple Ironmans with a minimum of 10 weeks separation, more ideally 12 or more weeks.

2012 was a great year for me overall that I am very proud of.  There were many highlights and at the top of the list is my dominating win at the Steelhead 70.3.  Winning a 70.3 is a major goal for pros in this sport and something that I am aware most will not get to experience.  I know that whatever I do or don't accomplish the rest of my racing career winning the 2012 Steelhead 70.3 is something I'll be able to look back on and really appreciate long after my racing days have finished.  I'm very excited for what journey this path with take me on in 2013.  There are big changes coming as I'll be getting married and moving to Iowa in the next two months.  Catch you on the flip side, here's to a great 2013!
Posted by Daniel Bretscher at 3:15 PM No comments: