Yesterday I raced the Racine 70.3 in Racine Wisconsin. It was my second attempted and first completed 70.3 of the season and possibly the most I've ever suffered in a 70.3.

My swim was pretty bad. Lost the big group early on and swam alone the entire way. Had some navigating issues along the way, a combination of swimming alone, the Lake Michigan waves, and very foggy goggles. Had to flip over three times along the way to clear my goggles. The bike was satisfactory. Rode alone most of the way which isn't usually good on a flat course. Held together pretty well until mile 50. Completely fell apart and crawled the last 6 miles into T2. Was out of fluids for the last 6 miles too which isn't a good thing heading into a hot run. As I got onto the run the overcast skies cleared and the temperature really shot up. I underestimated the heat and was too conservative with how much fluid I was taking at the aid stations. In addition I learned on the run that the gel in my flask which I carried along was too thick to squeeze out so I wasn't getting those calories down which I counted on. Started the second loop and things went downhill real quick. Had a complete bonk at mile 7, was walking, dizzy and thought I might have to drop out. Grabbed everything I could at the aid station and threw down as many calories as possible. That made it enough to carry on but I was still way behind on calories and running very slowly. Just soldiered through the second half as a steady flow of age-groupers went by me on their first lap. It was just suffering like I never have before. Could only manage to hold 7:30 pace the second half compared to 6:30 pace the first half. Finished, but that's about all I can say I accomplished on this day. Officially it goes down as a top-10 which I can't really complain about. And when you factor in that 18 pro men started 10th isn't so bad...except 6 dropped out along the way so really I was 10th out of 12, not so good. Been really struggling in training the last six weeks and I knew going in that a good race was a long shot. I can feel how fit I am and am pretty realistic with myself about where the fitness level is at. It's definitely not there right now, this result is not a surprise to me. I'm much more disappointed with the way I've been training than the result. At Rev3 Knoxville way back in May I got my butt handed to me in similar fashion to today. That really lit a fire under me and got me training great, I really hope that this result will do the same. There's still a lot of season left and it's not too late to brew up some great fitness. And I'm only going to make the 140.6 debut at Rev 3 Cedar Point if I'm ready for it, I'm not going to go there in anything less than top form. The day wasn't without its highlights, I got to chat up Craig Alexander briefly, I don't think triathlon could ask for a better champion to represent the sport. Had a few athletes race as well. The highlight was Julie with a 5:19 to finish 10th out of 82 in her age group. That's back to back PRs for Julie who is on a roll! 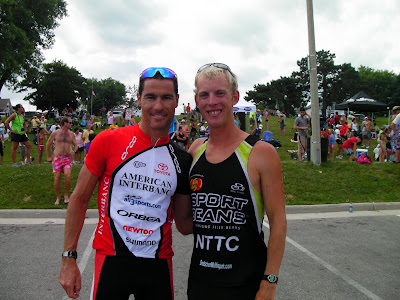 This past weekend I raced in the Decatur Triathlon. This is one of my favorite races of the year as the race sponsors me and the city of Decatur more or less adopts me as their 'hometown pro'. I really wanted to win this race after a disappointing fourth place finish last year. It wasn't to be as I was humbled for the second year in a row with a fifth place finish. I didn't race particularly poorly, the competition was just top notch. Five pros and one of the best AGers in the country toed the start line, pretty quality field for a hometown age group race. Funny what a little prize money will do. I was disappointed but after talking with roomate Jun, who raced in the Muncie Endurathon, I realized things could always be worse. Jun got very sick on the bike in his race and to add insult to injury he accidentally vomited into his aero drink, something only Jun would do. Things didn't improve much and eventually he had to DNF. I want to say thanks to the city of Decatur for all of the support and congratulations to all of the participants, especially the first timers and all of the finishers in the kids race Saturday. Sign me up for next year!

Posted by Daniel Bretscher at 10:19 PM No comments: