Ironman Wisconsin-Culmination of an 8 Year Journey

The season Leading into Wisconsin
The quick summary is I got injured in February (too much/too hard training without enough buildup) and the injury took about 6 weeks to recover from.  Although I was healthy before the heart of the racing season the fitness setback from the 6 weeks of injury resulted in less than desired race results for the entire first half of the race season.  The pinnacle of this was finishing 9th at the Racine 70.3 in July, a full 10 minutes off the winner.  Following that race I made the decision to cancel all of my planned races the rest of the summer in favor of doing a major training block and putting all of my cards into Ironman Wisconsin.

Swim:  52:16  3rd fastest split
I knew going into the race from the start list that I would not be able swim front pack at this race.  I started well and made it comfortably into the second pack.  After about 10 minutes or so the pace slowed substantially and after the first turn I made my way up front and into the lead of the group.  Ordinarily I’d never do this and would choose instead to swim easy and give up some time in favor of conserving in the draft, but I knew that Brandon Marsh, one of my main competitors would several minutes ahead of me out of the swim and I wanted to keep the pace from lagging and giving up more time than we already were.  I ended up pulling close to 10 guys and one female for close to the remaining 3000 meters of the swim.  I was hoping to limit Brandon to 3 minutes out of the swim, but I heard 4.5 minutes as I mounted the bike. 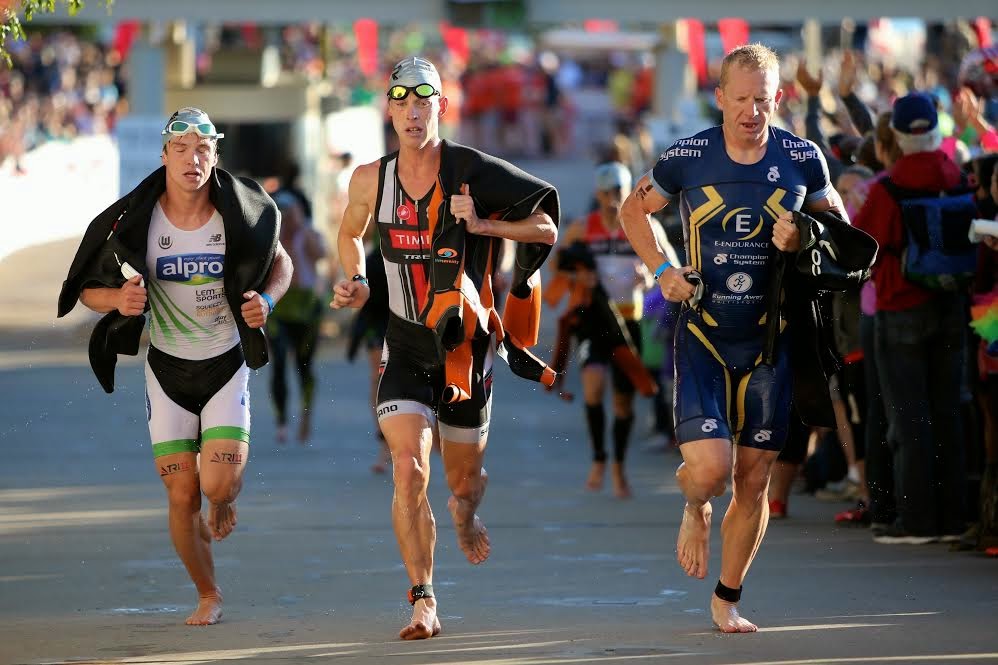 Bike:  4:42:57 23.8mph 3rd fastest split
My plan on the bike this year was to ride proactively, not reactively, and to not ride scared.  Last year I rode much more conservative as I had never raced an Ironman course this hilly.  I finished 6 minutes out of the win after surrendering 14 minutes on the bike and couldn’t help but wonder what if I had ridden harder.  This year I was just going to go for it and trust in all the 400 mile training weeks.  Our large pack out of the swim started together and I kept up front.  A few guys came by to take leads but I felt the pace was slowing each time so like the swim I took it upon myself to ride first in line in order to keep the pace high and limit the German uber-cyclist, Bachor’s lead.  After just 30 minutes I had dropped everyone except for two other riders and after 60 miles it was down to just myself and Pedro Gomes in 3rd-4th place.  I tried to break away but he was just too strong and by the time we reached 100 miles I was feeling the effects of the effort and my power dropped substantially the final 20k.  Thankfully the major hills were finished by that point.  We rolled into T2 right behind Brandon Marsh, catching him in the very last mile, 2nd-4th place within 20 seconds but 11 minutes down on the lead.  I rode 6 minutes faster than last year although conditions this year were a few minutes faster than last year. 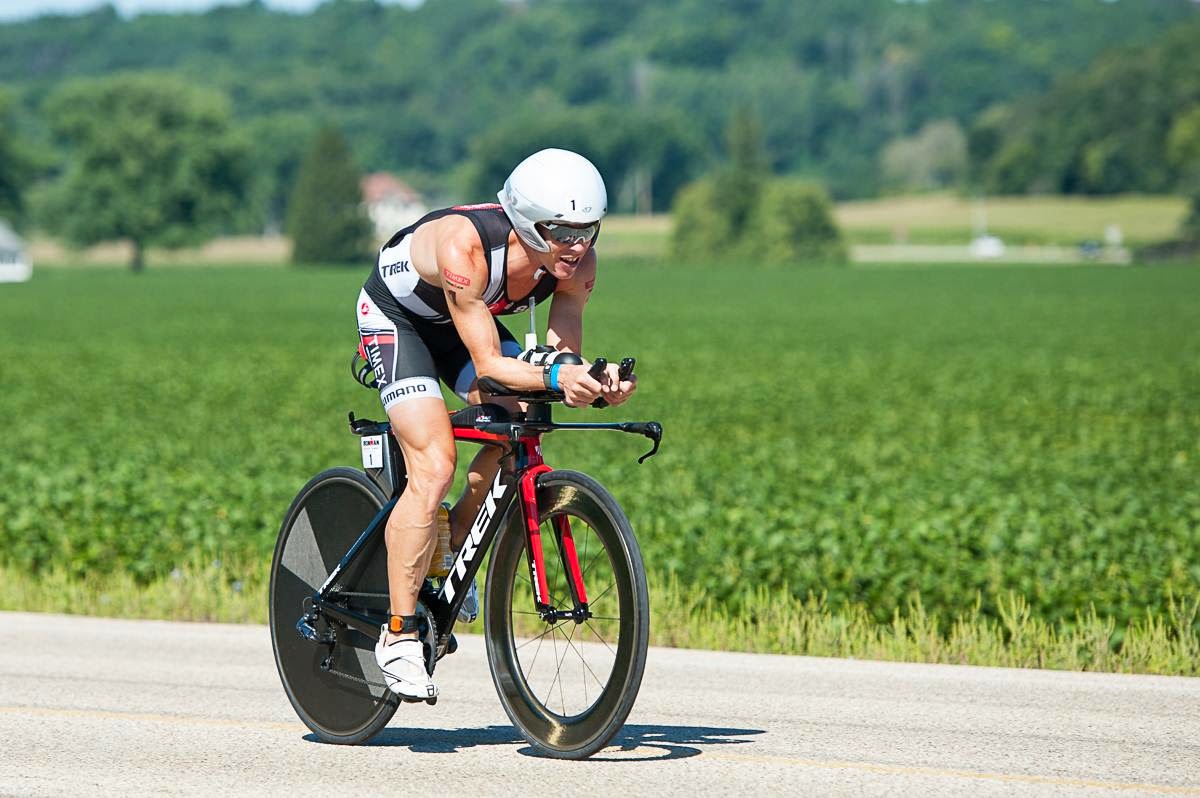 Run:  2:50:14  Fastest split, course record
I had the fastest T2 and was first of our group onto the run course.  The first 2-3 minutes were very slow and difficult and I jogged slowly to allow my legs to come around which they quickly did.  I was very surprised to see a first mile split of 6:04 and despite holding 6:05 minute pace the next 3 miles Pedro had dropped me and I had dropped Brandon.  I was through 10 miles holding 3rd place in 1:02:xx which I knew was too fast but it felt easy and despite sunny skies there was no hint of heat.  Through 13.1 in 1:23:11, my fastest opening 13.1 by 2 minutes.  At the turnaround I noticed Pedro was no longer putting time into me and just a minute ahead.  I thought second place was possible but we were still 8 minutes off the lead having only brought back 3 minutes in the opening half.
Around mile 16 Pedro was fading quickly, I was still feeling great and I decided to push the pace so he would have no thoughts of staying with me as I went by.  As I was catching him a spectator on the side of the road told me 2:30 down and my thought was ‘what are you talking about, he’s 50 yards in front of me’.  I made the pass on Pedro and soon after heard another report, “2 minutes down he’s walking”.  Suddenly it clicked and an incredible rush of emotion as although winning had been my goal since the moment I crossed the line second a year ago, this was the first time I thought it possible on the day.  I started thinking about winning the race and had to coax myself to snap out of it as I started getting goose bumps and emotional.  This was the opportunity I had thought about thousands of times in training the past 8 years.  The pass into the lead at mile 19 was anti-climatic as Bachor was walking through the aid station.  I passed my family and the massive crowd on State Street around that time and the excitement in the cheers was extremely energizing.  I saw I was 3:30 up on Marsh the guy I was most worried around and decided I was going to really push the next 2 miles to the final turnaround so that I could put the race away and relax the final miles.  Through 20 miles in 2:07:xx.
I hit the final turnaround suddenly my euphoria was gone as I saw Marsh had brought my lead down to 3 minutes despite me having made a very hard push the previous 2 miles.   Immediately the gravity of being on the verge of winning coupled with the exhaustion of the hard move I had made the previous 5 miles took hold and it was all almost debilitating.  I started thinking about Marsh coming from behind and the fact that I still have 5 miles to go.  I started to feel slightly dizzy and had a few minutes of pure helpless desperation.  I’ve never experienced such a feeling in my life and for a few minutes I didn’t know if I’d even finish.  I felt like I might lose it at any minute and collapse and I slowed to probably 9 minute pace because I was worried that if I collapsed between aid stations people might not find me (for some reason the fact that I had a 3 person escort and there were other racers on the course had completely escaped my mind).  I wanted to make it to the next aid station where I could lay down and be tended to.  As it turns out the few minutes of slow trot really saved me and I came back around, took in a lot of extra calories, and was able to regroup physically and mentally.  I’m still in the lead, I can do this.  I started taking a gel every mile though my pace was never the same following the bad patch.
2 miles to go, started checking behind me.  1 mile to go up State Street and I wish I could have enjoyed the massive roar of the crowd but was still in a bad enough place physically I knew it was still possible to be passed.  As I made the final few turns around the state capitol one of my escort cyclists slows and says to me, “I’m not allowed to talk to you but you have one minute to set the course record” (turns out I probably had closer to 3 minutes but I didn’t know the CR nor do I keep a race time on my watch).  That caused me to haul it down the finish chute and even 50 yards from the line I was still checking back for Marsh.  Finally the last 20 yards the excitement and flood of emotion came pouring out, I won this race, what a journey.  Brandon Marsh finished just a minute later and then Mike Reilly pulled me back out for the interview.  We stood for a few seconds waiting for the camera and the music to come down.  It was the first time everything stopped and in that moment I suddenly felt extremely ill and utterly exhausted.  I gave the entire interview with my eyes squinted shut just trying to stay upright and alert, I don’t recall the questions or my answers.  I set the course record by 90 seconds and a marathon course record by 7 seconds.  My 13.1 splits of 1:23:11/1:27:03 is the most even paced I’ve ever run and the first time I’ve run the last 13.1 under 1:30.  Going into the race I thought sub-2:55 would be good and sub-2:53 great (last year I ran 2:57).  I never knew I had 2:50 in me. 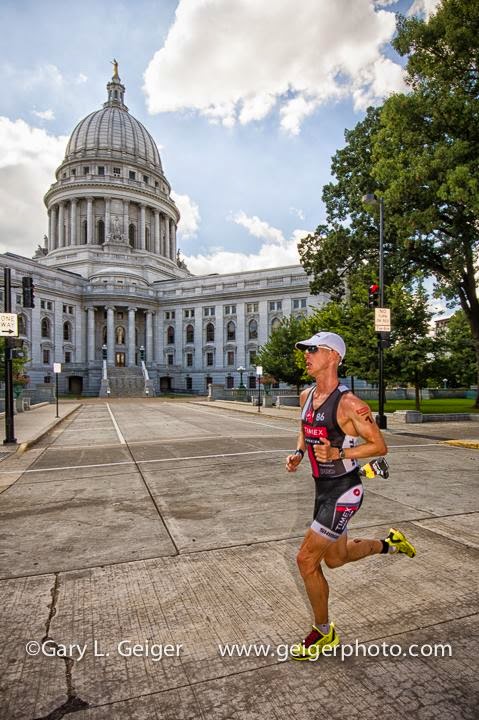 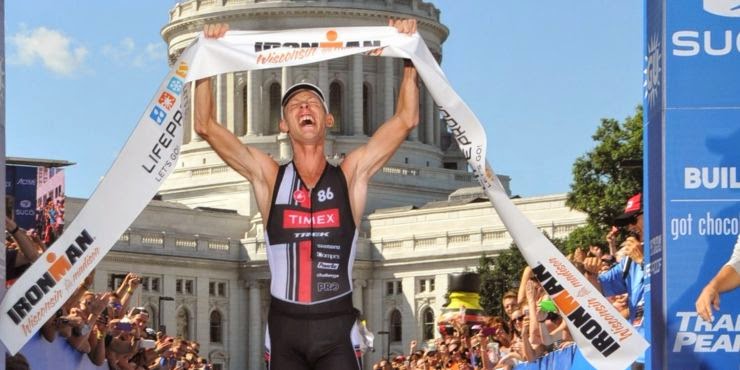 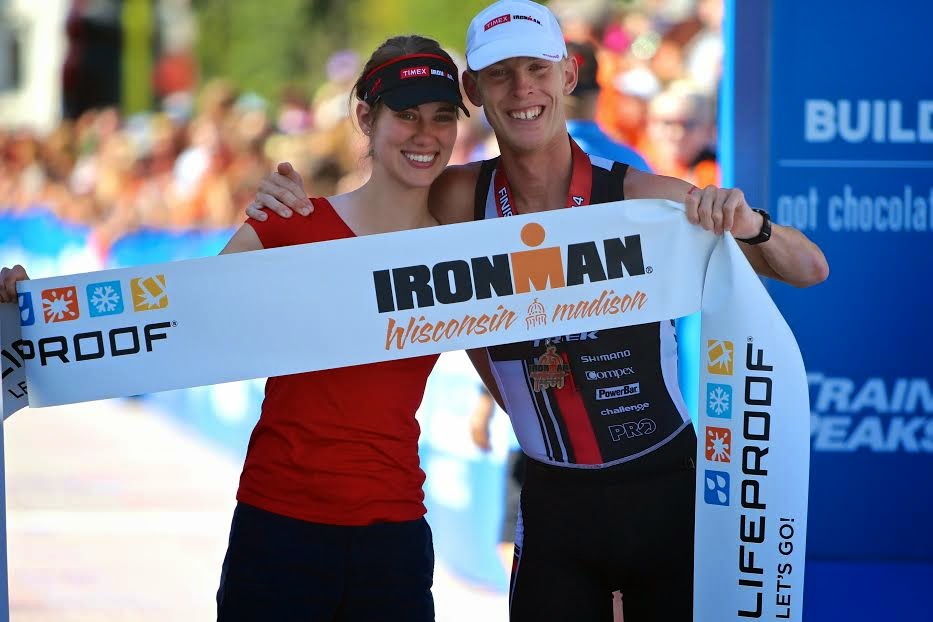 I’ve been asked a lot about what this win means to me and so far have given mostly superficial answers (hard work pays off, always believe, etc.)  While those answers are true, I’m not quite sure if I can properly put my feelings and emotions into words just yet.  I think a lot about 8.5 years ago when I was a DePauw University senior getting ready to graduate and while everyone was applying for jobs, grad school, etc. I knew in the back of my mind I really wanted to pursue triathlon.  At the time I didn’t know anything about what it meant to be a professional triathlete, the limited financial opportunities, or what it took physically, I just knew that I really enjoyed fitness, racing, and pushing myself to see what I could be.  While I’ll never know what my life would be today had I pursued a traditional post-school path, I can say with certainty that if I could travel back in time knowing what I know now, I’d make the exact same decision again.  And it didn’t take winning an Ironman, or any race, to justify that decision, it was justified long ago by the people I’ve met, places I’ve been, experiences and relationships I’ve had through the career path I’ve chosen.


I’m well aware that the life I’m living right now is not real or sustainable.  I won’t be doing what I’m doing now in 12 years.  Any time a career is dependent upon the physical performance of the body you’re always one major injury or accident away from the end.  I’m well aware that this journey could be over tomorrow for me.  But I know that no matter how much, or how little I accomplish, how long or how short my body allows me to continue racing, this has been worth it for me.

Posted by Daniel Bretscher at 10:29 PM